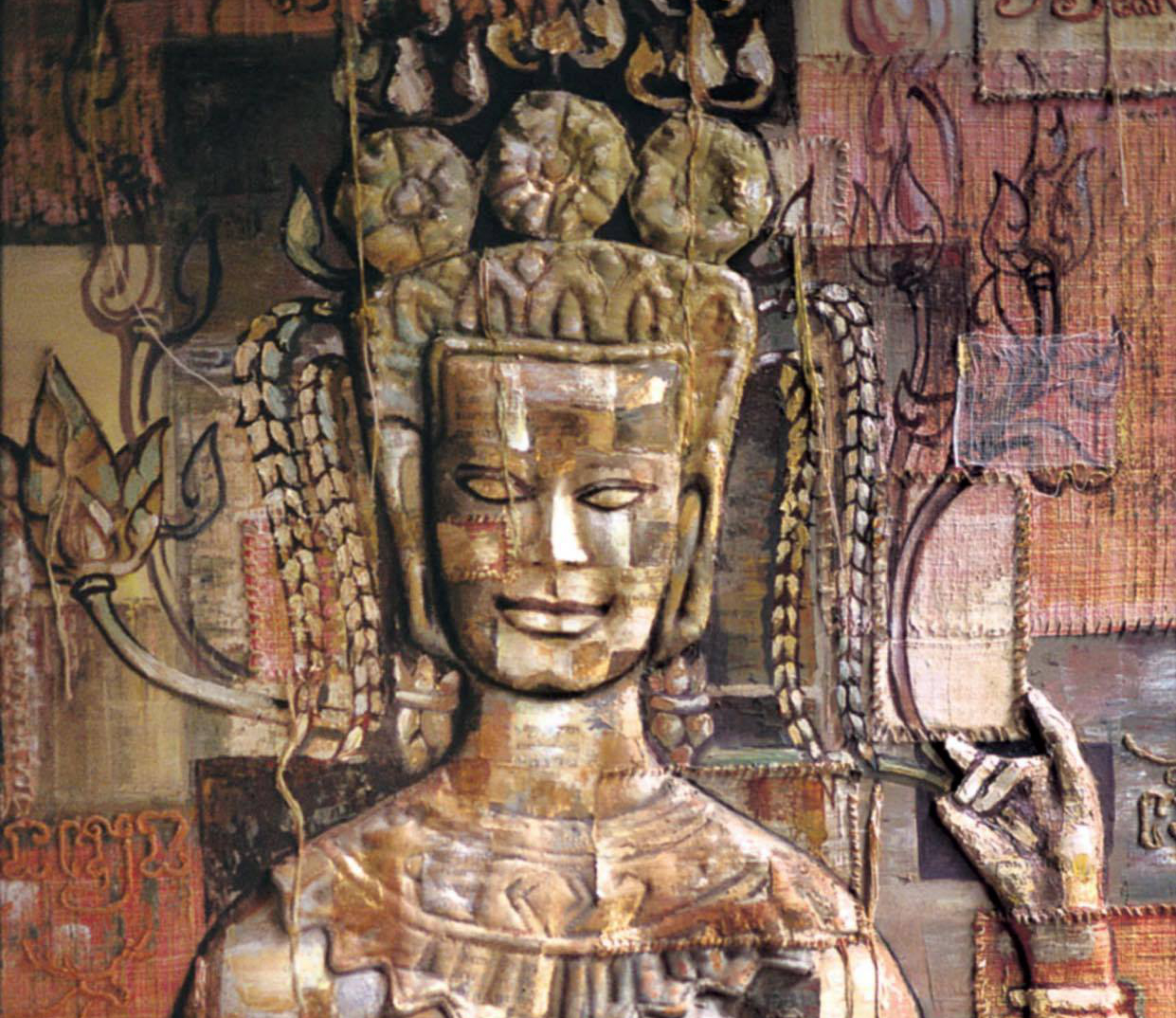 Attak: half, in the middle of, or one side. This concept is used to describe the balance between god and humanity. The artist has extended the theme to include such modern issues of culture, identity, politics, and gender.

Texts provided by Darryl Collins in conversation with the artist.

At the head of the male form, twelve signs depicting one’s destiny are depicted including: a stupa, gold and silver parasols, representations of human and god forms and the naga, or serpents. The phallus is divided into three sections, represented by geometric forms that coalesce into the whole: the square base that corresponds to Brahma, inhabited by animals, birds and trees with humankind; the creator an octagonal middle section corresponding to Vishnu, the preserver; and the circular upper section that denotes Shiva, the destroyer (and creator).

The painting of the square female form or yoni has at its centre a flower that man, represented as a bird, devours to pollinate, fertilise and that will ultimately bear fruit. Again, twelve cyclical animals of the Cambodian calendar-one for each year, radiate around the form. The yoni has at once been transformed into: a flower, a receptacle, the plan of a temple, house or palace, a square that represents stability surrounded by caring gods and demons.

Door guardian at Banteay Srei. Originating in the 10th century, this masculine form became a powerful symbol of protection and care. A god in the form of a man, Dvarapala stood guard at the temple preserving its safety.

In the 1970s to 1990s, the Khmer Rouge and poverty damaged the gods in stone while land mines and civil war maimed flesh and bone. Landmines represent a threat to life and livelihood while the Red Cross symbolizes hope, health and reconstruction.

Recently, I saw a living incarnation of Dvarapala standing on Street 240. The posture and strength of this man, despite his artificial leg, called to my mind the power of Angkor and the damage our Kingdom has sustained.

The empire has changed. An old woman, who has seen many regimes, laughs and shakes her head and feels hopeless. She is old but can remember everything clearly. She has no shoes, eats betelnut all day and relives her happy memories in her mind.

APSARA OF THE GREAT EMPIRE OF THE GOLDEN LAND

The Apsara created the written language, the arts, and religion. Many centuries ago the ancient people lived an elevated life that was bountiful and rich in culture. They built graceful temples over far-stretching lands. And it was said that it shined like gold.

The Java community art spaces operate as non-profit programs with support from the cafe and private sponsors. It brings art to the Phnom Penh public in ways they may not normally experience with beautiful and thought-provoking exhibitions and live events.

Some of our archived files have low resolution or don’t exist at all. Sometimes we were focused more on making exhibitions than archiving. Additionally, a fire many years ago destroyed all of our hard copies and a significant portion of our digital copies. If you are the artist or have access to images, press or anything else related to the exhibition, please contact us.